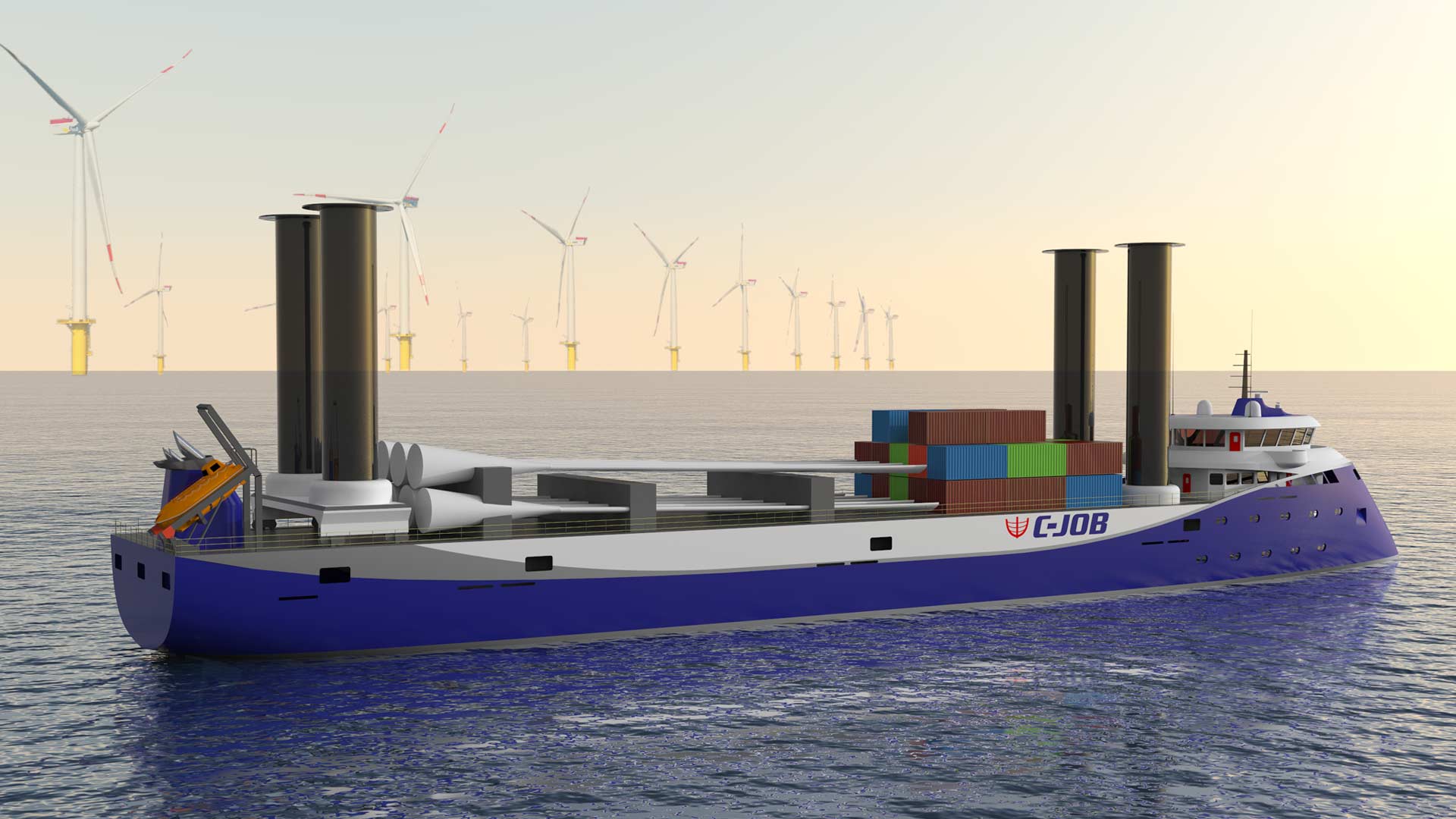 fuel savings up to

The 5000 DWT Flettner freighter has been developed within the European “SAIL” project. An important outcome of the project is that due to the dependence on trade winds, a 100% sailing vessel without an engine is not economically feasible within the commercial cargo transport sector. Broad research has been done to generate viable alternatives, leading to the model of wind assisted propulsion and hybrid shipping.

The Flettner Rotors create a forward lift by the rotation of the rotors and the wind. On average, the use of the Flettner Rotors results in a fuel saving of at least 18%, compared to conventional cargo vessels in the same DWT range.

The main innovation of the Flettner Freigher is the possibility to move the rear two Flettner Rotors in the longitudinal direction to accommodate for the best sail balance of the vessel and thus to optimally exploit the wind force and wind direction.

SAIL is an international cooperation in the European Interreg IVB North Sea Region under the leadership of the Dutch Province of Friesland and ends in 2015. The Flettner Freighter was developed in cooperation with a shipowner and is designed by C-Job Naval Architects. C-Job is known for earlier innovative ship designs, such as the green ferry MS. Texelstroom for TESO NV and the series of Heavy Lift Vessels for Hartman Shipping and Abis Shipping.

The ambition of the SAIL project partners is to enrich commercial shipping with innovative and sustainable vessels such as the Flettner Freighter.

To learn more about the Magnus Effect, watch this video. 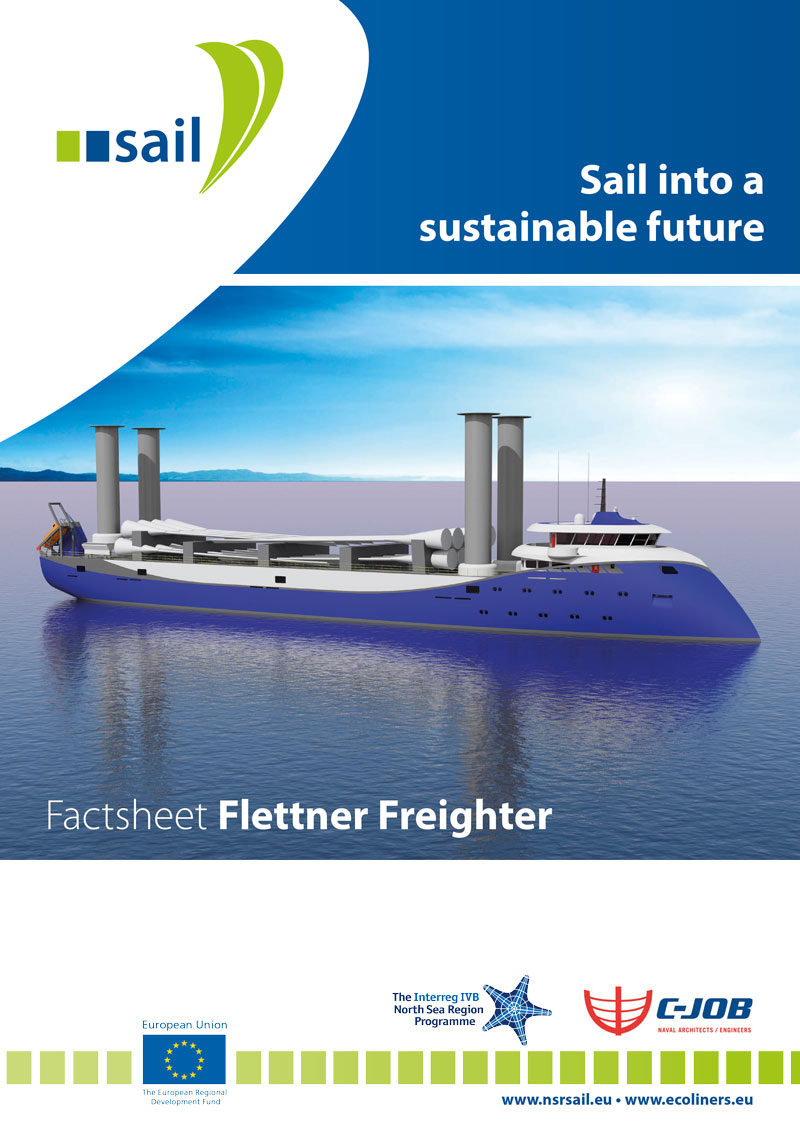 Want to know more about this project?

Ship-owners considering an investment in wind-assisted propulsion are faced with numerous questions. C-Job’s own long-term research, supplemented by additional graduate studies, means that they are the go-to partner for ship-owners looking for independent advice.

END_OF_DOCUMENT_TOKEN_TO_BE_REPLACED

A wind-assisted design for sustainable shipping

C-Job Naval Architects has just delivered a concept design to Switijnk Shipping that shows that, in order to speed the process of sustainability, some shipping companies are taking the matter into their own hands.

END_OF_DOCUMENT_TOKEN_TO_BE_REPLACED

Green ship - naval innovations Following increasing political and public attention to sustainable issues – the Paris Climate Agreement and numerous green innovations, for example – the call for change in the maritime industry has never been larger. C-Job shares the...

END_OF_DOCUMENT_TOKEN_TO_BE_REPLACED 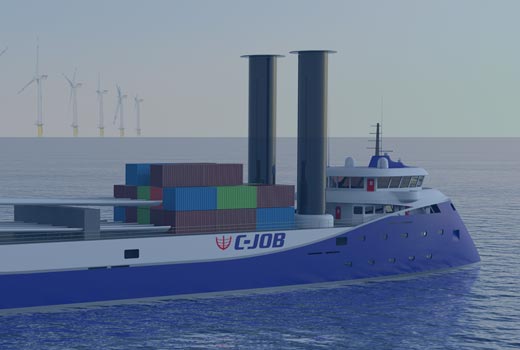 Out of these cookies, the cookies that are categorized as necessary are stored on your browser as they are essential for the working of basic functionalities of the website. We also use third-party cookies that help us analyze and understand how you use this website. These cookies will be stored in your browser only with your consent. You also have the option to opt-out of these cookies. But opting out of some of these cookies may have an effect on your browsing experience.
Necessary Always Enabled
Necessary cookies are absolutely essential for the website to function properly. This category only includes cookies that ensures basic functionalities and security features of the website. These cookies do not store any personal information.
Non-necessary
Any cookies that may not be particularly necessary for the website to function and is used specifically to collect user personal data via analytics, ads, other embedded contents are termed as non-necessary cookies. It is mandatory to procure user consent prior to running these cookies on your website.
SAVE & ACCEPT