C-Job Naval Architects today revealed its concept design of an Autonomous Underwater Maintenance Dredger. The unique design was presented by the independent ship design and engineering company at the combined Maritime and Port Technology and Development Conference (MTEC) and international Conference on Maritime Autonomous Surface Ships (ICMASS) in Trondheim, Norway.

The Autonomous Underwater Maintenance Dredger (AUMD) concept design developed by C-Job’s Research and Development department is specifically created for maintenance in port environments. The team took advantage of the opportunities and out-of-the-box solutions autonomous vessels provide such as completely submerging a dredging vessel.

This one-of-a-kind design is sustainable as it requires significantly less power compared to a conventional dredger which enables a 16MWh battery pack to power the AUMD and provides maintenance dredging for up to 12 hours.

Rolph Hijdra, Autonomous Vessels Research Lead at C-Job, says “When we developed this exciting design, we performed a comparison study with a conventional Trailing Suction Hopper Dredger. This showed that the Autonomous Underwater Maintenance Dredger requires 55% less propulsion power and by submersing the vessel we could reduce the suction head cutting the dredge pump power demand by 80%.”

The submersion of the design also increases operability as it mitigates wave motions as she’s capable to remain submerged throughout the dredging cycle. She only needs to surface for repair, maintenance and charging her batteries. The AUMD features the same hopper volume as the traditional dredger even though the overall length of C-Job’s design has been reduced by 20%.

Rolph continues “Autonomous shipping provides enormous potential for ship owners, with both technical design and economic benefits. According to our research, even with a conservative approach, we found that with the AUMD ship owners can expect nearly twice as much profit after 15 years. Though there’s a higher initial investment, operational cost are much lower which makes it an interesting option for companies to consider.”

While the Research and Development team focused on reduced power demand, sustainability, and operability, they also considered other aspects of the design. This includes emergency access which can be obtained through the diver’s lock included in the design. Data communication with the vessel was envisaged via shore-based communication networks such as 4G/5G.

Tim Vlaar, Technical Director at C-Job, says “In order for autonomous vessels like the Autonomous Underwater Maintenance Dredger to become reality more work is needed and requires all stakeholders such as class, port authorities, Autonomous Technology companies and launching customers to come together. Of course, continued development of autonomous vessel designs is also needed to fully explore the possibilities autonomous shipping presents even further.”

C-Job is renowned for its innovative ship design and engineering and has a strong track-record in several industries including Dredging, Offshore (Wind), Ferries, Yachts and Workboats. The company has a dedicated Research and Development department which focuses on new ways to improve and be innovative with both its designs as well as in the creation of these designs. This allows the company to show the economical and operational consequences in each design. Recent projects include the Autonomous Underwater Maintenance Dredger and exploring NH3 as a marine fuel.

For more information on C-Job and its R&D projects, click here. 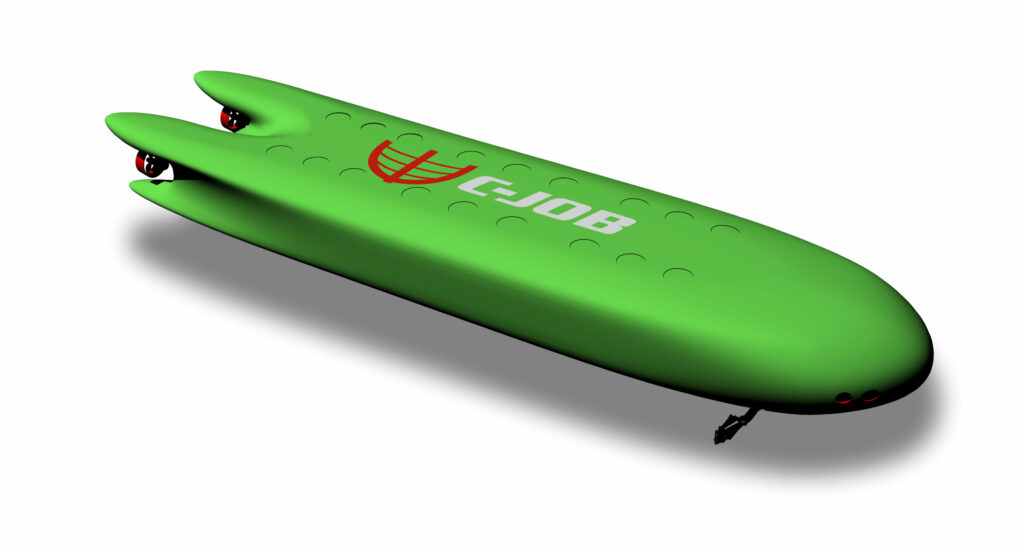 Abstract of the full research paper

A hopper dredger was chosen as a first autonomous concept design, since dredgers, next to Offshore and Passenger Vessels, are part of C-Job Naval Architects’ main market segments. By submerging a Trailing Suction Hopper Dredger (TSHD) a major benefit was identified in ship’s resistance and required vacuum for the dredge pump. The first aspect due to reduction in wave making and -breaking resistance, the second due to reduced suction depth relative to the pump. In addition, an increased part of the ship’s volume would generate displacement resulting in additional payload and a new arrangement of the vessel could be created resulting in a reduction in overall hull girder loads and reduced steel weight. To prove these insights, a comparative study was performed between a conventional, manned TSHD and the Autonomous Underwater Maintenance Dredger (AUMD). During this study the following aspects were quantified: hydrodynamic resistance, power requirements, sustainable power supply, general arrangement, redundancy / maintenance. The operational profile of the conventional TSHD, was used as a reference for the new concept. The developed concept showed very promising, both from operational as well as sustainability point of view. Some of the key benefits of the design are reduced dredge pump power (2×175 kw versus 2×675 kW), reduced propulsion power (2×575 kW versus 2×1100 kW), low OPEX, zero emission power supply and reduced hull girder loads. Amongst others, based on this concept design, C-Job feels strongly that Autonomous vessels have an enormous potential on (operational) improvements for ship operators. Not only by omitting the ship’s crew, but by fully utilizing the opportunities this presents.