The subject of sustainability in the maritime industry often (quite rightly) looks far ahead into the future. We talk about the pros and cons of the various renewable and carbon-free fuels. We weigh up all the economic and technological parameters. While these discussions about the ‘long-term’ have definite value, it is crucial to give attention to the ’mid-term’ too. This is what the energy transition is all about: it is the stepping-stone between the old and the new, between diesel and the clean fuels of the future. 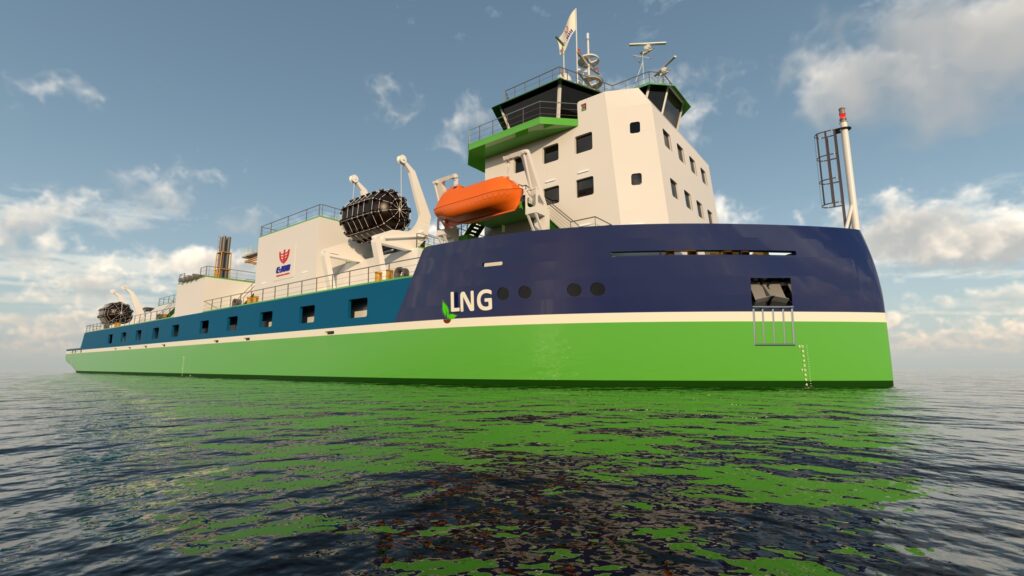 LNG is perhaps the best-known fuel of the energy transition. Admittedly, it is still a fossil fuel, but it is significantly cleaner than diesel. Moreover, its use ensures compliance with numerous IMO ‘green’ regulations. “LNG produces 25% less carbon dioxide emissions, much less nitrogen oxide, and zero sulfur and fine particles emissions than diesel. It is for this reason that it is being looked at as a transition fuel for the next two or three decades,” says Nikos Papapanagiotou, General Manager at C-Job.

Although it has the advantage of being cleaner than diesel, take-up of LNG in the maritime industry is facing a sizeable obstacle in the form of a lack of bunkering infrastructure. One potential solution to this is to have small-scale LNG bunker vessels operating in and between ports. Intrigued, C-Job decided to explore this topic.

“It is an idea that started a few years ago, back when the only LNG carriers were the massive ocean-going ships. However, a small-scale LNG bunker vessel can solve the problem that lots of ports do not have their own LNG infrastructure ,” continues Nikos. “It is still a relatively new idea – today there are only about 15 small LNG bunker vessels in the world – but we can contribute a lot in terms of ship design. We have the design experience and the R&D expertise.” 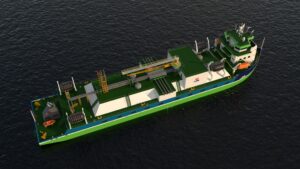 In creating an initial design for an LNG bunker vessel, the first decision to make is about the carrying capacity. “We think that 7,500m3 is the magic number of carrying capacity for a small LNG bunker vessel. This offers flexibility of operations, being able to serve ships in port in addition to being able to transport small quantities of LNG from A to B.” To put this figure into perspective, a dual-fuel LNG/diesel vessel needs anywhere between 300m3 and 1,000m3 to refuel.

Operational profile is another key factor that has to be taken into account when making a design. Nikos explains: “The operational profile depends on three factors. One: where is your source of LNG? Two: the amount of LNG that you expect to deliver. And three: Will there be any periods when you will not be bunkering, due to seasonal situations, for example. Looking at these three factors helps a ship-owner determine their specific ‘magic number’.

Every owner needs a unique vessel

The fact that a small LNG bunker vessel would operate in a port will have an impact on the design. This has led to C-Job’s initial design being quite short in length and wide in the beam. “It has to be able to maneuver and navigate in a good way within a port environment,” says Nikos. “And it can’t sit too deep in the water; our initial design has a fully loaded draught of just 6 meters. All this provides great operability. We have also thought about the wheelhouse – giving the captain 360-degree visibility, which is yet another plus point for working in a port.”

Because of the diversity of possible operational profiles, Nikos goes on to say that C-Job is not going to produce one vessel design that can do everything. “If we try to make the ‘Swiss Army knife’ of vessels, it is very possible that it will not succeed in this market. This vessel will simply not be at its optimal capacity and operability.

“Instead, every owner needs a unique vessel, because every port and every operational profile has their own set of parameters. We have developed a standard design of 7,500 m3 LNG bunker vessel which each client can customize to their specific needs. Both on design parameters such as length, beam, and draught but also on mission (LNG) equipment and design details to ensure the design will best meet their specific needs.” 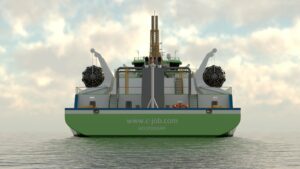 Autonomy – A Giant Leap Towards Decarbonization

September 29, 2022
This website uses cookies to improve your experience. We'll assume you're ok with this, but you can opt-out if you wish. Cookie SettingsAcceptReject All
Manage consent