The Interceptor: C-Job’s collaboration with The Ocean Cleanup

First, a quick reminder for those readers who are maybe unaware of The Ocean Cleanup. This non-profit environmental organization has the ultimate goal to accomplish a 90% reduction of floating ocean plastic by the year 2040. To achieve this goal, The Ocean Cleanup is designing and developing systems to clean up polluted oceans and to intercept plastic before it reaches oceans via rivers.

The Ocean Cleanup’s Interceptor™ is a 100% solar-powered, autonomously operating system to remove river-borne plastic. The importance of removing such river-borne plastic cannot be denied, a fact emphasized by The Ocean Cleanup’s own research. This has shown that rivers are the main source of ocean plastic pollution: 1,000 rivers are responsible for roughly 80% of plastic pollution in oceans. This 2-minute video is a great visual aid.

C-Job involvement with The Ocean Cleanup

To find out more about C-Job’s involvement with The Ocean Cleanup’s Interceptor™, the Newsflash caught up with Nikos Papapanagiotou, Lead Naval Architect at C-Job.

“The Ocean Cleanup came to us during the process of developing their concept design for the Interceptor™ together with engineering firm TME. They wanted us to develop the idea further by looking at the system from a naval architectural perspective. This led to us helping with the brainstorming of ideas, participating in their risk assessments and evaluations. In general, contributing an advisory role in the decision-making process.”

The initial part of C-Job’s participation with the Interceptor™ was to carry out diverse calculations on this concept design. Nikos explains: “The Interceptor™ starts with a floating barrier that directs the flow of floating plastic towards two floating parts, rather like a catamaran. These come together to form the open mouth where the conveyor belt starts. We assisted the engineering company with the floating structures during the concept and basic design stage. With the results from our stability calculations, the definition of loading conditions and structural analysis of the floaters, they could calculate the superstructure design.”

As the Interceptor™ project progressed, C-Job continued to provide additional naval architectural support. “This included looking at how the general arrangement could be optimized from a naval architectural point of view as well as advising with documentation relating to the points below.” 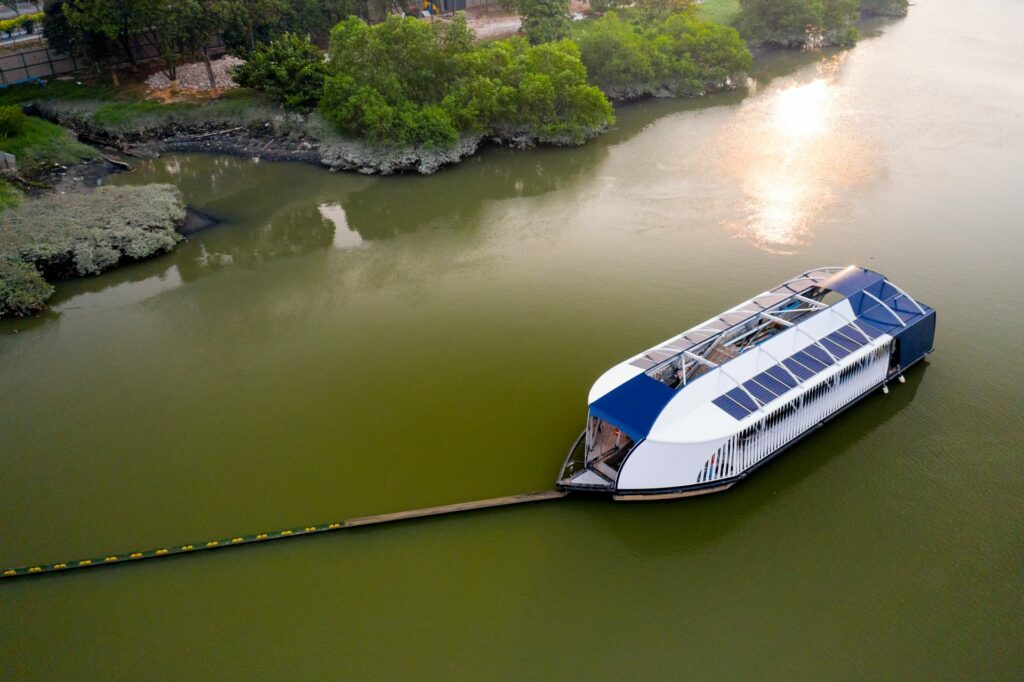 At the time of writing, two Interceptors™ are operational in Jakarta, Indonesia and Klang, Malaysia. Two more systems are ready for deployment in the Mekong Delta, Vietnam and Santo Domingo, Dominican Republic.

“We really enjoyed this collaborative project and contributing to such innovative out-of-the-box solutions,” adds Nikos. “To that end, we are looking forward to continue working with The Ocean Cleanup – and supporting their sustainable mission – in the future.”

May 20, 2022
This website uses cookies to improve your experience. We'll assume you're ok with this, but you can opt-out if you wish. Cookie SettingsAcceptReject All
Manage consent